Oh, I have been bad about updating the blog, that’s for sure. So I thought that I had better post a quick update before everyone loses interest in the lives of Kai and Pixel!

There is a lot going on here. After my grandmother’s death, I set out to put together a book of photos from her life. I didn’t have the dates for some of her ancestors so I decided to look them up online. One thing led to another and I discovered a site called ancestry.com. They have indexed all of the birth, death, marriage, immigration, census records for all over the world and for the most part all you have to do is type in the name of your ancestor and you get a lot of information. This has turned into a complete addiction and I have managed, through this site, to find several distant cousins — one for each major branch of the family.

This had turned out to be quite exciting because I found one cousin still in England who had lots of info about what happened to the family there. These would have been my grandmother’s cousins and I’m kicking myself for not having done this earlier. She would have been so interested and thrilled to know that I had found her English relatives. I also found Cousin John in Whitby, Ontario who has done all of the research on the B. family. Everything. No need for us to do anything in fact. We are both descendants of William B. who came to Canada from Cornwall, England. He was a conservative, brimstone “Bible Christian” who came to Canada with several others of their faith. I didn’t know any of this. Here are William and Betsy B.: 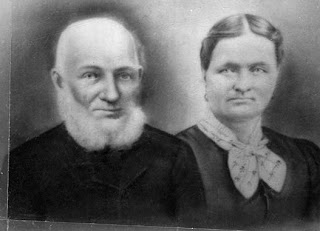 So I have been quite caught up with this genealogy kick and have managed to get farther than what we have had before due to the internet. It has been a blast. However, I have to put that aside for the next little while as I am beginning my Master’s in Communication and Technology program at U of A next week. It is a program designed for people who work full time and consists of several online courses plus two three-week intensive sessions. It will take me a while to complete it, but I am so happy to be using my brain again. I have decided definitively that I am not good at being a housewife!

Kai has been helpful in allowing me to follow my genealogy kick by learning how to walk in the last few weeks. He is walking most of the time now and it is so unbelievably sweet. He is like a zombie — stiff knees and arms out. Of course, I don’t know if Pixel is too thrilled with this new development as he is chasing her most of the time.

My mom is coming out to help look after Kai while I’m in school. It will be great to have her here and I know Kai will love it. My dad is also coming out a bit later on. He is going first to visit friends in B.C. and then he is taking the train from Vancouver to Edmonton. This has been a life-long dream so it will interesting to see how he likes it.

Andreas is doing well. He finished teaching his part of the undergrad biology course and he is now getting ready to be primary parent for a few weeks. And of course, we both have our eyes on the big prize coming up: the trip to Germany in June.

OK, that’s all for now. I’ll try to post more in the next few weeks.

« Easter Trip to Nordegg Woof is the word »

© 2021 The Misadventures of Kai and Pixel|ProPhoto4 by NetRivet Sites